Like the Winter Palace and the Marble Palace, the Vladimir Palace fronts  Palace Embankment; water frontage on the Neva was extremely prized by the Russian aristocracy. The façade, richly ornamented with struccorustication, was patterned after Leon Battista Alberti's palazzi in Florence. The main porch is built of  Brenen sandstone and adorned with griffins, coats-of-arms, and cast-iron  lanterns. Other details are cast in portland cement.

After the October Revolution, the palace became the home of the 'Academics' House' (дНЛ сВ╦МШУ), (named after Maxim Gorky), and as a consequence its interior has been preserved to a greater extent than other Romanov family residences. Much attractive tiling, and many internal architectural details have been retained. Also preserved has been much of Vladimir's collection of late 19th-century porcelain, most of it manufactured in the Imperial Porcelain Factory, and painted or decorated by its leading artists. The collection has been extended to include interesting porcelain from the early Soviet period, including figures of Chaliapin and Nijinsky, as well as vases and dinner services inspired by constructivism. 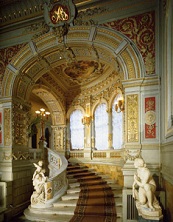 The Main Staircase designed in elaborate French renaissance style of King Francois I. The Staircase starts from the Vestibule and leads straight up to a half landing. There the original staircase turns back on itself and runs to the first floor, while a second stairway- added by Mcsmakher, curves up to the left and leads to the east wing. The ceiling is decorated with a painting entitled "A genius on the banks of the Niva river" painted byVereshchagin. 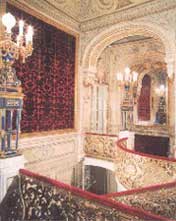 The Gold Staircase. In the east wing installed in 1881 -1891 by well- known architect л. Mesmakher. The Main Staircase is highlighted with bronze chandeliers presented to the palace by Empress Maria Alexandrovna. 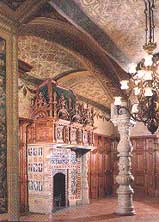 The largest Raspberry Parlour is decorated In Italian Renaissance style. The carved ceiling is made of a nut tree on a sample of the ceilingsin Venice. The magnificent chandelier in the centre of the ceiling is of milky whiteglass designed in Murano factory. The room Is hung with many pictures from the original collection of Grand Duke Vladimir. 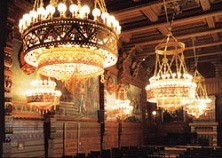 The oak hall is decorated in unusual style based on the traditional Russian folk elements. The ceiling, panelling, cornice, and borders are all painted in imitation of oak. which makes the room seem interesting. Five popular Russian fairy tales decorate the walls, interpreted by Vereshchagin in oil on a special rough canvas that makes them look like tapestries. 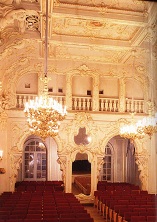 The Ballroom is decorated in elaborate Louis XV Rococo style with an elaborate music gallery The ornate walls and ceiling includes beautifully sculptured figures of nymphs and cherubs. The three medallion paintings to the celling executed by Vereshchagln. 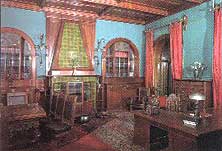 Grand-ducal Study room
In the very beginning of the XX th cen. The study-room of Grand Duke Vladimir was designed in "Art Nouveau" style. It Is one of the best examples of Art Nouveau style In the city In the middle of the study-room, working table of Grand Duke Vladimir still could be seen. This room in the only study safe In St. Petersburg. After the revolution of 1905, the family ordered to install steel panels of three study windows.

The view from the Palace's windows